Catalog 405
Digital Catalogs
Order Catalogs
Beyond the Book
The Grainger catalog goes by many names. It’s been known as The MotorBook, The Big Book, The Grainger Catalog, and The Catalog. This year, catalog devotees will simply refer to the catalog by its issue number — The 406.Producing the Grainger catalog each year is a monumental effort that requires a full year to plan, produce and print. Besides meeting strict deadlines to keep the huge catalog on schedule, the team is challenged with fitting all of the SKUs into the book, while maintaining the integrity and accuracy of the information Grainger customers need and expect. In fact, over the last ten years the number of products in the catalog has grown by over 700%, while the page count has only grown by 29%. The paper used to print the catalog has also become thinner to keep the form factor nearly the same; all to offer more while keeping the catalog easy to use. And today, all of the paper in the catalog is Forest Stewardship Council (FSC) certified to support environmentally sustainable practices. But it’s still big, weighing as much as a healthy newborn baby at 8 pounds 9 ounces.
Advertisement:

The MotorBook—Where It All Started

In 1927, a young electrical engineer named William Wallace Grainger started a wholesale business distributing electric motors. The first catalog, featuring only electric motors, was more of a pamphlet than a catalog. At only 8 pages, the cover of the MotorBook declared: “A Bright Future for Dealers Selling Motors.”

In that same year, the business grew rapidly. So much so that MotorBook B expanded to 32 pages. This book featured a greater selection of items, including drills, lathes, pump jacks, pumps, testing meters, bench saws, grinders and revolving display tables. Other items not before seen in the book included a floor polisher and air wagon, a ventilator, and even the Bee-Vac clothes washer. The front of this catalog declared: “NEW Motors in Colors.” 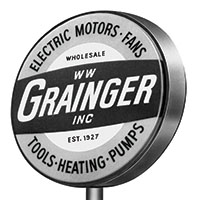 By early 1928, The MotorBook featured more than 100 different electric motors. Ten years later in January 1938, the Dayton brand name appeared for the first time in MotorBook 96, with a line of 3-phase motors. By this time, Motorbooks featured regular editorials by company founder, Bill Grainger. In 1941, in MotorBook No. 133, his editorial stated: “The dealer with stocks of goods will get the lion’s share of the business.”
When he graduated in 1950 from The University of Wisconsin with a degree in electrical engineering, the founder’s son first worked for two years as an engineer for an electric motor manufacturer in Indiana. In 1952, he came to work full time for Grainger. “I came to work the first morning, and my father said, ‘Well,’ handing me the then catalog of 104 pages, ‘You’re a hot-shot new electrical engineer, right? Here’s the catalog. Make it better.’ ”
The new engineer understood that a customer needed enough information to make a purchase. So to answer his father’s challenge to make the catalog better, he says, “We found ways to improve the listings. The way to get an order is to answer the customer’s questions. He doesn’t buy if he has unanswered questions.”
A great catalog with high-quality photos and illustrations, helpful product data and specifications, along with local product availability were all priorities that became the cornerstone of the Grainger business early on. In the beginning, the Grainger catalog was the primary sales tool. In the company’s formative years, Bill Grainger encouraged his salesmen to keep the catalog with them at all times. “At a meeting if a salesman had a catalog with him, my dad would give him a dollar. If a sales manager walked in without a catalog, it would cost him five dollars. That was when a dollar was worth a lot more than it is today. The salesmen caught on quickly.”
Just as they have in the past, today’s customers require answers to their questions before they buy. Built on a very simple concept that answering customers’ questions makes the sale, the Grainger catalog has stood the test of time. Even in today’s online age, people heavily turn to the Grainger catalog, which contains detailed information on over 593,000 items.
jdsource2019-12-14T08:59:12-05:00April 28th, 2015|Comments Off on History of the Grainger Catalog – Yesterday and Today